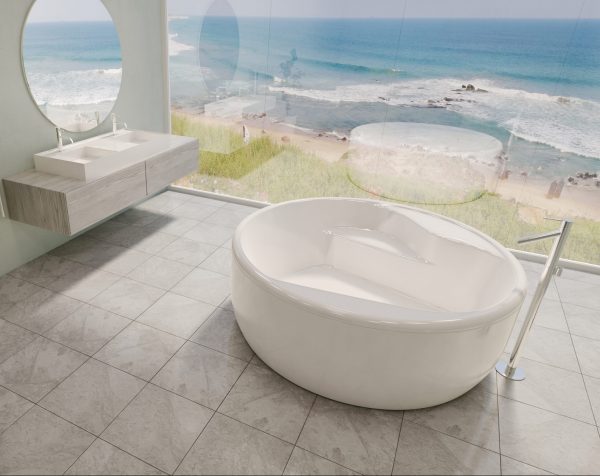 Chic and contemporary, a freestanding bath is guaranteed to add longevity to your bathroom. Without any wall support, it is a style that dominates and makes for a strong design feature, be it a traditional clawfoot or pedestal bath in any of its variations.

When it comes to installation there are certain logistics to keep in mind. There are practicalities that must be addressed in terms of its installation that requires research and time committed to detail as well as technical awareness about plumbing and drainage.

A freestanding bath is more successful when it is fitted as part of a brand new bathroom makeover rather than adding one to an existing bathroom. When installing, ensure there is adequate space between the wall and the bath to ensure easy cleaning. Map it out so you’re able to get around freely with a mop.

Let’s face it, freestanding baths are more luxurious, whether you like modern or vintage design. They’ve been really popular in recent years because not only are they gorgeous, but most are actually designed for people who want to enjoy a bath. They make a strong design statement in a room and they come in an incredible variety of shapes and sizes, allowing you to customize your bathroom’s style to a tee.

On the other hand, there are some practical advantages to built-in bathtubs, especially in the smaller spaces so many of us are now living in. They just fit better in most bathrooms and they are often easier to use and clean.

They both have advantages and disadvantages. But each is not for everyone, and not for every bathroom. It’s important to consider your space and think about what will fit the best. Our guide will give you everything you need to know to make the right decision on your next bathtub.

These baths look so very chic. They attract attention, instantly grabbing your eye when you enter the bathroom. They can be a little impractical in some cases, but fans of freestanding baths will forgive all else just for the look.

Choice. A freestanding tub can fit any style. From the classic claw-foot to a modern egg shape, there is no limit to the variability of freestanding baths. They aren’t limited by the need to fit between walls or into tile, so their designers are able to be more creative with the shape.

Most people who pick a freestanding bath do so because of the look. It’s unique, and it makes a statement that is often associated with luxury–most high-end spas will utilise freestanding baths.

Installation. Compared to a built-in bath, a freestanding bath is easy to install, you’ll likely just need a plumber.

Placement. Freestanding baths allow you to use your space more creatively. Want a bath directly in the middle of the room? Why not! While built-in baths may need two or more walls for their install, with freestanding baths anything goes!

Price. Freestanding baths are generally more expensive than built-in baths, even when installation is considered. This is because they are more complex to build and have more design flourishes.

Weight. Freestanding baths can be extremely heavy, often requiring a reinforced floor. You can buy fibreglass models, but these are less common and can be more expensive. They are also generally larger, and that means they weigh more when full of water.

Showerless. If you want to combine a shower with a bath, a built-in bath is the way to go. It is possible to mount a shower to a freestanding bath, but it tends to look ungainly and requires a wrap-around curtain. Some come with a small hand-held unit for rinsing off, so if you’re content with that you’ll be ok.

Storage. Freestanding baths have fewer options in terms of accessible storage than built-ins. There is simply no ledge on a freestanding bath to put your shampoo or candles.

Size. You might have difficulty getting in an out of some of the swimming-pool sized beauties we’ve seen. Plus, some are also way too tall to lean over the edge, which is a problem when giving a child a bath.

The old reliable – but for good reason! The built-in bath continues to be a favorite for many due to its practicality and sensibility. With the right design, a built-in bath can have every bit as much beauty as a freestanding bath.

Price. Despite the increased availability of cheaper freestanding baths, built-in tubs are generally going to be the more affordable option. This, of course, depends on the cost of the surround, if your built-in bath requires it.

Space savings. Built-in baths are going to be more space-economical. They sit flush with a wall, so they’re usually tucked out of the way. Freestanding baths will generally require space around them, so they tend to use space a little less efficiently. If you have a small bathroom, you may want to go with a built-in tub.

Storage. Because built-in tubs are mounted flush with walls, they will offer many more options in terms of storage. For example, shelves can be mounted on the walls beside built-in bath for bath and shower products. Wall Recesses are also now a popular option. Furthermore, if you have a sizable surround, you’ll be able to use the edge of the bath itself for storage.

Easier to Clean. Built in baths are smaller, and they usually don’t have as many cracks and crevices to clean. Plus, you only have to clean the inside of the tub, rather than the outside and the bottom.

Flexibility. Of course, placement isn’t as flexible as it is with freestanding baths. Built-in baths are going to be relegated to the sides of the room, and many will need to be placed in a corner.

Choice. There simply are not as many options for built-in baths. This means that built-in tubs must rely on their surround for their style, their unique look. Though there is some creativity in the built-in tub space, there is far less than with freestanding baths.

Installation. Despite the possible need for new plumbing, freestanding baths still make for an easier installation than do built-ins. Built-in tubs require waterproof sealing, mounting, and often the creation of a surround. Freestanding baths require none of these.

Look. While it comes really comes down to personal taste, there is something about a freestanding bath that outshines even the most stylish of built-ins. There is nothing in the built-in bath space that compares to the design statement that freestanding bath can make.

Personal Choice
Ultimately the choice is personal. If you have the space and like the look of a freestanding bath, you’ll be willing to overlook the disadvantages and go for the more luxury & stylish option. If you want the practicality and simplicity of a built-in, don’t despair. There is a lot of variety out there and you can find something that will work for the look you’re going for.

If you’re trying to determine what will add the most value to your home, it’s a tough call. Our advice is to make sure the bath fits you well so you can use it. A bathroom that works well together is going to have the most value.